What is an Electronic Cigarette / E-Cig?

An electronic cigarette, also known as an e-cig or a vape, are an alternative to smoking tobacco cigarettes.

E-cigarettes are generally considered safer as they don’t produce tar, carbon monoxide and many of the other nasties in tobacco smoke.

How an e-cig works…

There are many different e-cig’s from the basic cig-a-like that looks like a cigarette to large “mods” with big batteries and custom tanks.

Most users start off with something small but often find they want more of a hit, and want the battery to last a bit longer. You can build the perfect e-cig for you or buy a ready to go kit.

Our friends at Mig Vapor have provided the special promo for you below!

So what’s the best e-cig for beginners…

We find many people find the Mig 21 to be a great kit for people trying out to e-cigs for the first time. The Mig 21 is a fully customizeable e-cig kit that comes with 2 batteries, 3 tanks, chargers, e-liquid and a beautiful hand crafted cherry wood box to keep it all in – it’s a great kit for beginners or as a gift! In the box you’ll find all a beginner needs to get vaping.

For those who want a bit more power…

If you want more of a “hit” and an e-cig that last you all day the Aspire SR 72 kit is a great choice! It has a bigger more powerful battery, which means more vapor and more options!

You can even upgrade your SR 72 to a variable voltage (VV) battery so you have complete control over the power of your battery. The Aspire SR 72 kit also has a larger tank so your e-cig will last you a lot longer; its the perfect daily vape!

Or take it to the next level with the a mod!

How to find the best e-liquid / e-juice for you?

E-cigs are filled with e-liquid containing nicotine which is vaporized by heating it, and then inhaled and exhaled creating a smoke like vapor. Not all e-cig liquids contains nicotine, and various strengths including 3mg, 6mg, 12mg, 18mg and 24mg. Normally e-liquid is made from a blend vegetable glycerine (VG) and propylene glycol (PG), nicotine and flavoring.

Why not create your own custom e-liquid flavor in the Vimanna E-Juice Bar! 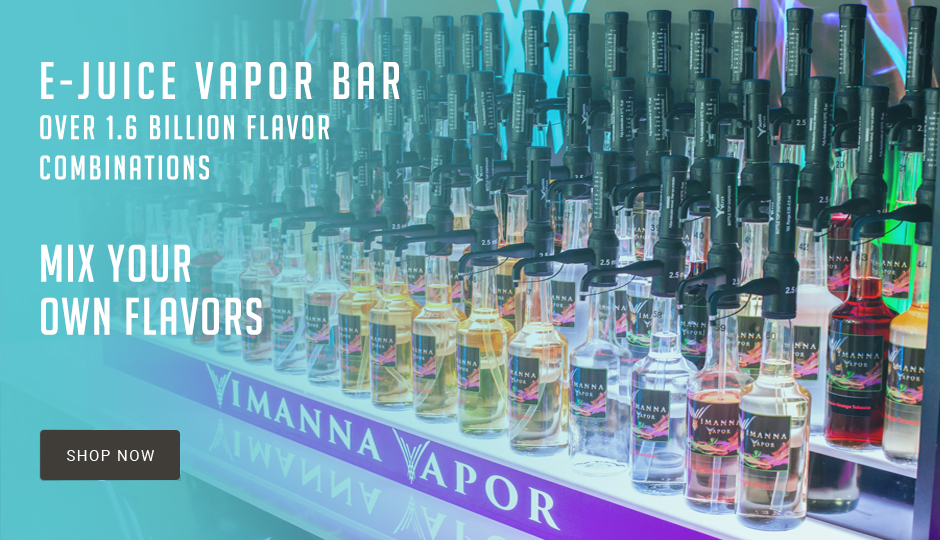 Make your own bottle of your custom unique blend e-liquid with up to 5 flavors for your unique vape combinations. There is a huge selection of flavors so you can create your own custom mix to suit your unique tastes, its a bit like an e-cig cocktail!

The Vimanna E-Juice Bar flavors include:

EARN MONEY WITH OUR VAPORIZER AND E-CIG AFFILIATE SCHEME!

How Does a Dry Herb Vaporizer Work?